Following are questions frequently asked by customers, or which address important issues affecting satisfaction with a decking project. 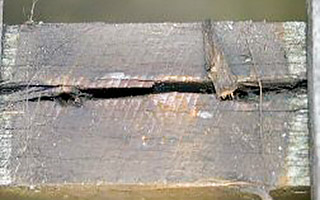 Fixings act like little wedges, exerting splitting stresses on the joist. Where the fixings are close to one another, such as where they have been placed in a straight line, the splitting stresses can join up and the joist may have a split which runs from fixing to fixing and which can be seen if you look between the deck boards. (refer image below).

Staggering the alignment of the fixings increases the distance between them so that the splitting stresses are unlikely to combine.

The possibility that joists may split from the stresses caused during fixing of the deck can be significantly reduced by placing fixings in a formal staggered alignment/pattern, offset by approximately 10mm (approximately 5mm each side of the centerline of a wide joist).

In addition, joists should be pre-drilled when using large diameter or deformed shank fixings to reduce splitting stresses or to allow hand nailing.

Why should I use wider joists?
Wider joists, ie 50mm unseasoned hardwood, 42mm seasoned hardwood or 45mm seasoned softwood, should be used to allow the placing of fixings in a formal staggered alignment/pattern, to reduce the likelihood of split joists, while also maintaining the required edge clearance to avoid breaking out the side of the joist.

Wider joists are also better for joining of decking boards over the joist.

Why should materials and construction methods be of good quality, but also suitable for external conditions?
The external environment has a severe effect on building materials and the materials used in a fully exposed timber deck must not only be of good quality but suitable for the application eg only hot dipped galvanised bolts are both “quality” and “suitable” for external applications - zinc plated bolts may be a “quality” product but they are not “suitable” for external use as the zinc coating will corrode from the surface quickly in contact with treated timber commonly used externally. The unprotected surface will then rust quickly leading to premature failure.

LifePlus® Decking is only manufactured from “selected hardwoods” - high quality, durability 1 (outside above ground classification to AS 5604 - 2003) hardwoods (with sapwood preservative treated to hazard level H3) with proven durability, stability and weathering characteristics to deliver superior performance in weather exposed conditions.

Note that LifePlus® Decking is not produced from “mixed hardwoods”, which can be supplied from a variety of hardwood species including some which are of lower durability, higher shrinkage and lower stability than we would consider acceptable.

Other “suitable materials” and practices include: